You are using an outdated browser. Please upgrade your browser to improve your experience and security.
Toni Morrison
American author
Media
Print
Thank you for your feedback

What did Toni Morrison write?

Why is Toni Morrison important?

Morrison was noted for her examination of the black experience (particularly the black female experience) within the black community. In an unjust society, her characters struggle to find themselves and their cultural identity. Her use of fantasy, her sinuous poetic style, and her rich interweaving of the mythic gave her stories great strength and texture.

What awards did Toni Morrison win?

Morrison won a Pulitzer Prize for fiction for the critically acclaimed novel Beloved (1987). She received the Nobel Prize for Literature in 1993. In 2010 Morrison was made an officer of the French Legion of Honour. Two years later she was awarded the U.S. Presidential Medal of Freedom.

Morrison grew up in the American Midwest in a family that possessed an intense love of and appreciation for black culture. Storytelling, songs, and folktales were a deeply formative part of her childhood. She attended Howard University (B.A., 1953) and Cornell University (M.A., 1955). After teaching at Texas Southern University for two years, she taught at Howard from 1957 to 1964. In 1965 Morrison became a fiction editor at Random House, where she worked for a number of years. In 1984 she began teaching writing at the State University of New York at Albany, which she left in 1989 to join the faculty of Princeton University; she retired in 2006.

Morrison’s first book, The Bluest Eye (1970), is a novel of initiation concerning a victimized adolescent black girl who is obsessed by white standards of beauty and longs to have blue eyes. In 1973 a second novel, Sula, was published; it examines (among other issues) the dynamics of friendship and the expectations for conformity within the community. Song of Solomon (1977) is told by a male narrator in search of his identity; its publication brought Morrison to national attention. Tar Baby (1981), set on a Caribbean island, explores conflicts of race, class, and sex.

The critically acclaimed Beloved (1987), which won a Pulitzer Prize for fiction, is based on the true story of a runaway slave who, at the point of recapture, kills her infant daughter in order to spare her a life of slavery. A film adaptation of the novel was released in 1998 and starred Oprah Winfrey. In addition, Morrison wrote the libretto for Margaret Garner (2005), an opera about the same story that inspired Beloved.

In 1992 Morrison released Jazz, a story of violence and passion set in New York City’s Harlem during the 1920s. Subsequent novels were Paradise (1998), a richly detailed portrait of a black utopian community in Oklahoma, and Love (2003), an intricate family story that reveals the myriad facets of love and its ostensible opposite. A Mercy (2008) deals with slavery in 17th-century America. In the redemptive Home (2012), a traumatized Korean War veteran encounters racism after returning home and later overcomes apathy to rescue his sister. In God Help the Child (2015), Morrison chronicled the ramifications of child abuse and neglect through the tale of Bride, a black girl with dark skin who is born to light-skinned parents.

A work of criticism, Playing in the Dark: Whiteness and the Literary Imagination, was published in 1992. Many of Morrison’s essays and speeches were collected in What Moves at the Margin: Selected Nonfiction (2008; edited by Carolyn C. Denard) and The Source of Self-Regard: Selected Essays, Speeches, and Meditations (2019). She and her son, Slade Morrison, cowrote a number of children’s books, including the Who’s Got Game? series, The Book About Mean People (2002), and Please, Louise (2014). She also penned Remember (2004), which chronicles the hardships of black students during the integration of the American public school system; aimed at children, it uses archival photographs juxtaposed with captions speculating on the thoughts of their subjects. For that work, Morrison won the Coretta Scott King Award in 2005.

The central theme of Morrison’s novels is the black American experience; in an unjust society, her characters struggle to find themselves and their cultural identity. Her use of fantasy, her sinuous poetic style, and her rich interweaving of the mythic gave her stories great strength and texture. In 2010 Morrison was made an officer of the French Legion of Honour. Two years later she was awarded the U.S. Presidential Medal of Freedom. Toni Morrison: The Pieces I Am (2019) is a documentary about her life and career.

The Editors of Encyclopaedia Britannica This article was most recently revised and updated by Amy Tikkanen, Corrections Manager. 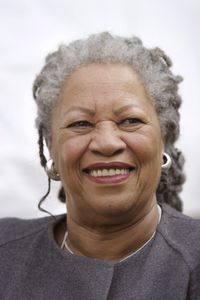