You are using an outdated browser. Please upgrade your browser to improve your experience and security.
Eugène-Emmanuel Viollet-le-Duc
French architect
Media
Print
Thank you for your feedback

Viollet-le-Duc was a pupil of Achille Leclère but was inspired in his career by the architect Henri Labrouste. In 1836 he traveled to Italy, where he spent 16 months studying architecture. Back in France he was drawn irrevocably to Gothic art. J.-B. Lassus first trained Viollet-le-Duc as a medieval archaeologist on the restoration of Saint-Germain-l’Auxerrois (1838). In 1839 his friend, the writer Prosper Mérimée, placed him in charge of the restoration of the abbey church of La Madeleine at Vézelay (1840), the first edifice to be restored by a modern state commission. Mérimée, a medievalist of note, was inspector of the recently formed Commission on Historical Monuments, an organization in which Viollet-le-Duc soon became a focal figure. In the early 1840s (through the 1860s) he worked with Lassus on restoring the Sainte-Chapelle in Paris, and in 1844 he and Lassus were appointed to restore Notre-Dame de Paris and to build a new sacristy in the Gothic style; this commission was regarded as an official sanction for the Gothic Revival movement in France. Another important early restoration was the work done in 1846 on the abbey church of Saint-Denis. After 1848 he was associated with the Service des édifices Diocésains, supervising the restoration of numerous medieval buildings, the most important being the Amiens Cathedral (1849), the synodal hall at Sens (1849), the fortifications of Carcassonne (1852), and the church of Saint-Sernin at Toulouse (1862).

Viollet-le-Duc can be said to have dominated 19th-century theories of architectural restoration; his initial aim was to restore in the style of the original, but his later restorations show that he often added entirely new elements of his own design. Twentieth-century archaeologists and restorers have severely criticized these fanciful reconstructions and added structures posing as restorations, for they often destroy or render obscure the original form of the edifice.

Of his original works, all his designs for ecclesiastical buildings were in a weak Gothic style, notably the churches of Saint-Gimer and Nouvelle Aude at Carcassonne and Saint-Denis-de-l’Estrée at Saint-Denis. In his own work, however, he was not a confirmed medieval revivalist, for all but one of his secular buildings are in an uneasy Renaissance mode.

Viollet-le-Duc’s numerous written works, all finely illustrated, provide the foundation on which his distinction rests. He wrote two great encyclopaedic works containing exact structural information and extensive design analysis: Dictionnaire raisonné de l’architecture fran?aise du XIe au XVIe siècle (1854–68; “Analytical Dictionary of French Architecture from the XIth to the XVIth Century”) and the Dictionnaire raisonné du mobilier fran?ais de l’époque carlovingienne à la Rénaissance (1858–75; “Analytical Dictionary of French Furniture from the Carlovingians to the Renaissance”). Running to 16 volumes, these two works provided the vital visual and intellectual inspiration required to sustain the Gothic Revival movement. He determined, however, to think his way beyond the Romantic attractions of the Gothic style. Pursuing the inquiries of 18th-century French architectural theorists, he envisaged a rational architecture for the 19th century based on the coherent system of construction and composition that he had observed in Gothic architecture but that would in no way imitate its forms and details. Architecture, he thought, should be a direct expression of current materials, technology, and functional needs. Ironically, he was unable to accept the challenge of his own ideas, for both he and his French disciples continued to design buildings in eclectic styles.

Viollet-le-Duc’s general theory of architecture, which affected the development of modern organic and functional concepts of design, was set forth in his book Entretiens sur l’architecture (1858–72). Translated into English as Discourses on Architecture (1875), this work, containing information on the construction of iron skeletons enclosed by nonbearing masonry walls, especially influenced the late-19th-century architects of the Chicago school, particularly John W. Root. Other important writings by Viollet-le-Duc include L’Art russe (1877; “Russian Art”) and De la décoration appliquée aux édifices (1879; “On Decoration Applied to Buildings”). 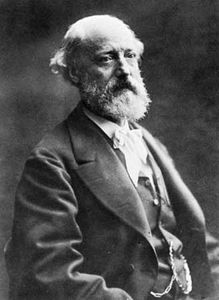