You are using an outdated browser. Please upgrade your browser to improve your experience and security.
Cimabue
Italian painter
Media
Print
Thank you for your feedback

Cimabue, original name Bencivieni di Pepo, modern Italian Benvenuto di Giuseppe, (born before 1251—died 1302), painter and mosaicist, the last great Italian artist in the Byzantine style, which had dominated early medieval painting in Italy. Among his surviving works are the frescoes of New Testament scenes in the upper church of S. Francesco, Assisi; the Sta. Trinità Madonna (c. 1290); and the Madonna Enthroned with St. Francis (c. 1290–95).

Britannica Quiz
This or That? Painter vs. Architect
William Morris Hunt

Cimabue’s style provided the firm foundation upon which rested the art of Giotto and Duccio in the 14th century, although he was superseded in his own lifetime by these artists, both of whom he had influenced and perhaps trained. His great contemporary, Dante, recognized the importance of Cimabue and placed him at the forefront of Italian painters. Giorgio Vasari, in his Lives of the Most Eminent Italian Painters, Sculptors, and Architects… (1550), begins his collection of biographies with the life of Cimabue. Art historiographers from the 14th century to the present have recognized the art and career of Cimabue as the dividing line between the old and the new traditions in western European painting.

The earliest biography of Cimabue, by Vasari, states that he was born in 1240 and died in 1300. The dates can only be approximations, for it is documented that Cimabue was alive and working in Pisa in 1302. The only other document relative to his life identifies him as a master painter and witness to a document signed in Rome in 1272. From this it can be concluded that he was born prior to 1251. Other documents indicate that he was christened Bencivieni di Pepo, or Benvenuto di Giuseppe in modern Italian. Cimabue was a nickname that through an error later became a family name.

Nothing is known of his early training. Vasari’s assertion that he was apprenticed to Greek Byzantine painters living in Italy is probably an attempt to explain both the style and the sudden emergence of this genius. He was certainly influenced by the Italo-Byzantine painter Giunta Pisano and by Coppo di Marcovaldo and may have been an apprentice to Coppo.

Cimabue’s character may be reflected in his name, which can perhaps best be translated as “bullheaded.” An anonymous commentator in a work on Dante written in 1333–34 said that Cimabue was so proud and demanding that if others found fault with his work, or if he found something displeasing in it himself, he would destroy the work, no matter how valuable. It is perhaps significant that in the Divine Comedy Dante places Cimabue among the proud in Purgatory. And the poet refers to him to illustrate the transience of earthly fame: “Cimabue thought to hold the field in painting, and now Giotto hath the cry.” But pride in his own accomplishments and a high personal standard of excellence separated Cimabue from the anonymous artists of the Middle Ages.

Only Cimabue’s last work, the mosaic of St. John the Evangelist, in the Duomo of Pisa, is dated (1301–02). The large Crucifix, in S. Domenico, Arezzo, is generally accepted as his earliest work and datable before 1272. The frescoes in the upper church of S. Francesco, Assisi—some of which were damaged in the earthquake of 1997 and later restored—were probably executed between 1288 and 1290. The period 1290–95 includes the large Crucifix for Sta. Croce in Florence—about 70 percent destroyed in the floods of 1966, though restoration has been completed; the Sta. Trinità Madonna, an altarpiece now in Florence’s Uffizi; and the Madonna Enthroned with St. Francis, in the lower church of S. Francesco at Assisi.

Despite the small number of Cimabue’s works that have survived, they fully support the reputation that the artist has acquired. In certain formal or more “official” commissions, such as crucifixes and large altarpieces, Cimabue adhered closely to the formal vocabulary of the Byzantine tradition. And yet he breathes new emotive content into the abstract or stylized forms. In the fresco cycle at Assisi, Cimabue found an especially receptive patron, for the art commissioned by the Franciscans from Cimabue’s time on is generally characterized by a dramatic and emotive narrative.

Along with the traditional stylization of the human form, Cimabue seems to have been among the first to return to a close observation of nature. In a highly formal altarpiece such as the Sta. Trinità Madonna, he introduces at the base of the throne four prophets who are modeled through light and dark in a highly sculptural manner that seems far in advance of its date. Cimabue seems also to have been one of the first to recognize the potentialities of painted architecture, which he introduced into his scenes to give an indication of place and a heightened sense of three-dimensionality. The fresco The Four Evangelists, in the vault of the crossing of the upper church at Assisi, is sculpturally conceived, but its solidity and bulk are heightened by the crystalline city views that accompany each of the figures. The view of Rome that accompanies St. Mark, for example, is not only one of the earliest recognizable views of the city but is also one of the first in which the buildings seem solid and separated one from the other by a clearly defined space. This concern with the illusion of space and with a three-dimensional form occupying that space is rarely met with in medieval painting prior to Cimabue, but it is highly characteristic of Cimabue’s leading student and rival, Giotto.

In Cimabue’s more formal works he follows tradition closely, but he brings to that tradition a heightened sense of drama. After him the Byzantine tradition in Italy died out, partly because it had been superseded by a new style, but also because he had exhausted all the possibilities inherent in the tradition. In his less formal works he was able to exploit a growing interest in narrative that had been inherent in the Byzantine tradition but never fully developed. Finally, he brought to Italian painting a new awareness of space and of sculptural form. By his own personality and by his contributions to painting he merits Vasari’s characterization of him as the first Florentine painter and the first painter of “modern” times. 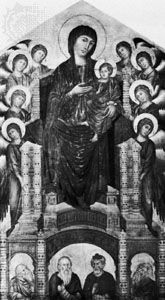